The group owns and operates a Calcined Petroleum Coke (CPC) Plant that was engineered, designed and erected under the direct supervision of Engineers India Limited and was commissioned and operational from the year 1975. Petro Carbon and Chemicals Private Limited (PCCPL) was incorporated on September 2007 and was subsequently acquired, revamped and upgraded in May 2008. Since then, the group has been successful in evolving PCCPL into a sizeable CPC player in the Indian market. Calcined Petroleum Coke (CPC) is the product from calcining raw petroleum coke (RPC). The raw coke is the product of the Coker unit in a crude oil refinery. CPC is used to make anodes for aluminium smelting and is also used in dioxide industry, steel and titanium.

The Plant has a capacity of approximately 93,750 tons per annum of CPC and comprises an area of around 30 acres with good infrastructure facilities like railway siding for facilitating unloading/loading of wagons, along with yard/shed to store raw petroleum coke/Calcined Petroleum Coke.

The company is proposing to establish 0.80 MTPA Iron Ore Palletisation plant within the unutilised vacant land of exiting boundary. This pellet plant will be ideally located as port based export oriented unit to meet the growing demand of Steel Plant in India and Abroad.

PCCPL is strategically located within the port perimeter and has access to all the strategic transportation means at door step. It has a comparative advantage, given the prime land of 30 acres at one of the busiest ports of eastern India, along with private railway sidings inside the factory premises which makes it the best combination for the bulk commodity-focused group. The plant is virtually on the National Highway 41 and is well connected through road to strategic states like Odisha, Jharkhand, Madhya Pradesh etc. Haldia port has a minimal ship waiting time and a low turn round time for the vessels of 230 meters length and 32 meters width which can be easily accommodated in the port. The port has 13 berths. Seven of them are exclusively dedicated to coal and coke.

Since calcination process generates a considerable quantity of hot flue gases varying between 58,000 to 64,000 Nm^3/Hr at around 850 to 900 °C, PCCPL proposes to put up a Waste Heat Based Power Plant of 6.5 MW Capacity in order to effectively and usefully utilize this hot flue gases in an environmentally friendly manner, thereby not only reducing the overall carbon footprints but also in reducing the local ambient impact of the plant’s surrounding. In generating this useful energy through non-conventional source (waste flue gas) PCCPL would also contribute in meeting Renewal Energy (RE) obligations and RPO targets of distribution licensees of the state as PCCPL intent to have a long term Power Purchase Agreement (PPA) with West Bengal State Electricity Distribution Company Limited (WBSEDCL) for the sale of power. 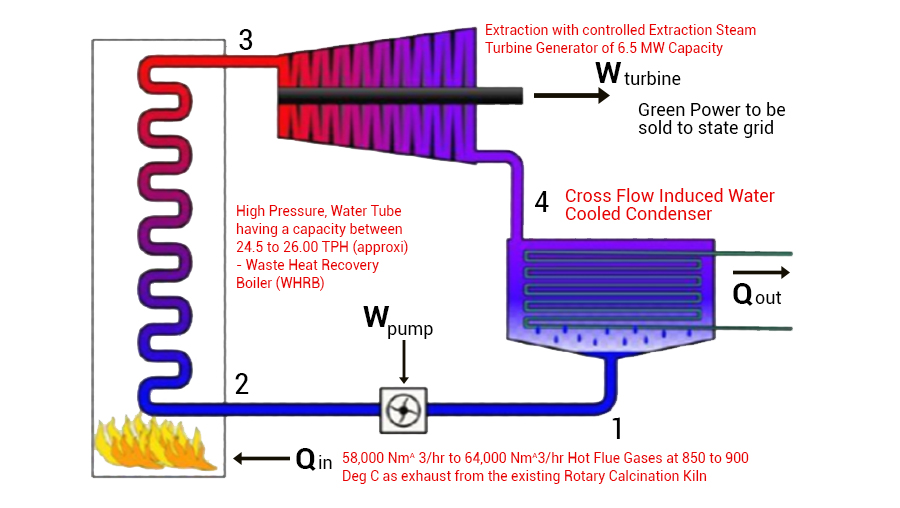